After what must have been a tense afternoon for all, the British League Division One team manager Tony Bush, was pleased to report that the squad had achieved a ‘great escape’ having gone into the final match in sixth position – just one spot clear of the dreaded relegation zone!

After an all-day battle, with positions changing after every event, we finished fourth on the day, only five points behind second, and ended the season in fifth place in the League, and now ranked 13th in the UK. Enfield and Herne Hill were relegated.

Ollie Smith won the 400 metres in a new PB of 47.74 while Ben Maze was second in the B string. We welcomed back Olympian Andrew Baddeley after a five-year gap, and he took second spot in the 800 metres. Omar Grant finished a good second in the 200 metres while Jack Kirby again placed third in the high hurdles, and Terry Fawden made a great debut to finish fourth in the steeplechase.

Luke Roach-Christie returned to the team after his exams, and he placed third in the shot in a competitive 14.62, while also winning the B string discus. Charlie Granville and Dave Sketchley scored great points in the javelin while Jake Storey, on debut, produced an excellent 2.05 high jump which was only good enough for fourth spot in a high quality event. Schools international Teepee Princewill placed third in the triple jump with Damaine Benjamin taking second spot in the B event.

Many thanks to everyone who competed in the BAL this season and see you again in 2017!

Late breaking news for the ladies UK Womens League team who finished fourth in Sale on Sunday and thereby also secured their place in Division 1 for 2017 – well done all! 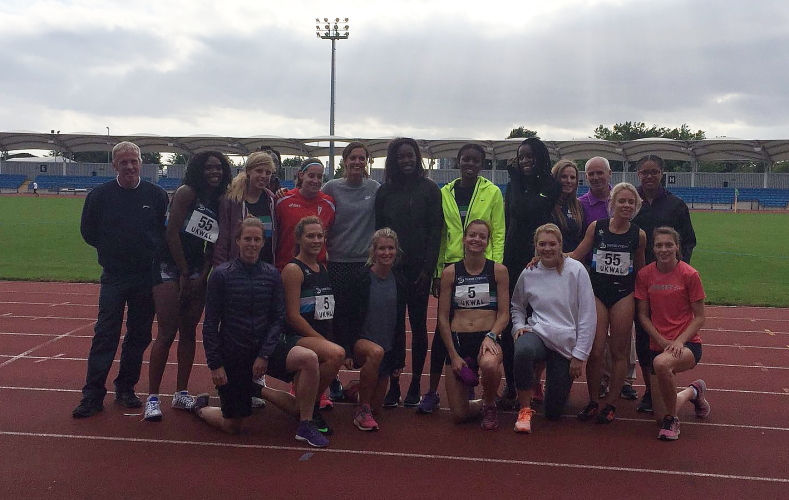 There was an incredible day of success for Harrow as both the men’s and ladies’ national league teams were promoted for the 2016 season!

The men’s final match at Kingston was a tough competition (as always!) with Thames Valley Harriers pulling out all the stops to win but Harrow edged ahead of hosts Kingston to finish second in both the match and final league position.

“Congratulations on achieving promotion after a strong second place in the final BAL fixture at Kingston yesterday. We just missed out on the League title but we can all be proud of what we have achieved over the past three seasons. In 2013, we scored 14 league points for sixth place, last year was 21 league points for a distant third, this year we scored 28 points to secure promotion. Many thanks to everyone who contributed.

“We had five A string victories yesterday; a double sprints victory for Omar, a massive 50cm victory for JJ, a PB on his BAL debut for Jack and a win for Tony at the back end of an injury-wracked season. PBs also for Shane on his debut, Jonny on his debut, Neil in the 800 and Harry in the 1500.”

“Just to let you know that the ladies are DIVISION 2 CHAMPIONS and have won promotion to Division 1 next season, a first for the ladies side. It was a really close match and I do not have results as we had to rush to get our taxi to the station. We have celebrated with Champagne on the train home!! Thank you for supporting us. Big thanks to officials (Sylviane, Ian and Mike) and Tim for all their help this season.”

Harrow’s British League team finished in fourth place at Derby on Saturday with the non-availability of some athletes causing the usual team management challenges!

However, there were a number of encouraging results which included a win for Stephen Mears in the 800m (1.54) and solid point-scoring in the javelin where Charlie Granville took second with 57.88m and Dave Sketchley won the B string with 56.16m.

There were also personal bests for 400m runner Max Arzt-Jones with 50.30 and talented all-rounder and Club stalwart Noel Reid in the Pole Vault with 3.20m! The relay squads were also sharp with the 4x100m team winning in 42.47s and the 4×400 relay runners placing second in a quick 3.20.68.

The results leave Harrow second in the league and 1 point behind TVH, and the final match at Kingston on 8th August will decide if we are to be promoted for next year’s competition – athletes please make yourself available for selection!

Despite an unjust disqualification in the final 4x400m event, Harrow won the home British League fixture at Watford’s Woodside stadium!

Harrow opened the British League season in style with a win at Crawley in Division 2 of the league scoring 321 points ahead of Thames Valley Harriers! Congratulations to the team and manager Tony Bush. Full report to follow.

Looking forward, the Club is hosting its home match for the British League on Saturday 6th June at the Woodside Stadium, Watford.

Due to changes in the way that the league now manages these events, we are responsible for providing the range of officials and need your help to ensure we can host this match successfully. Details are in the information sheet here so please contact our officials secretary Carolyn Wilson if you can help on the day.