Harrow AC boys were first in U10 s, U12 s and U15 s and we also had second places in U12Gs, U15Gs and U15Bs. This wasn’t a Club fixture but comes under the category of an event that a number of our athletes compete in.

Congratulations to Laurance Edwards, Alex Bickerstaff and Arinze Ofurum on winning their races!

The North West London League kicked off on Saturday with Harrow being represented in every age group except U17 boys.

The result of the day for Harrow was Louis Hunt 1st in the U13 boys race. Having led for 95% of the race he held on till the end despite being closely chased by Luca Stubbs (previously Shaftesbury now running for St Albans School). The determination from both boys, who are both NWLL champions at U11, was evident.

U13 boys & girls and U11 girls teams all finished in 3rd place. Well done to all the runners who ran for Harrow for the first time, they all ran really well.

Michelle Rowlands has kindly agreed to continue with the spike exchange scheme for athletes to exchange spikes at Bannister this Wednesday night.

Great start to the new winter season as our young athletes took part in the Middlesex & Herts Road Relays held at Hayes.

The official results are not in yet but our U15 Boys team of Laurance Edwards, Chris Morris and Sam Bickerstaff did well winning silver and U17 girls squad of Rachael Haddow, Lillian Cottrell and Jessica Leanne won the bronze medals – well done all! 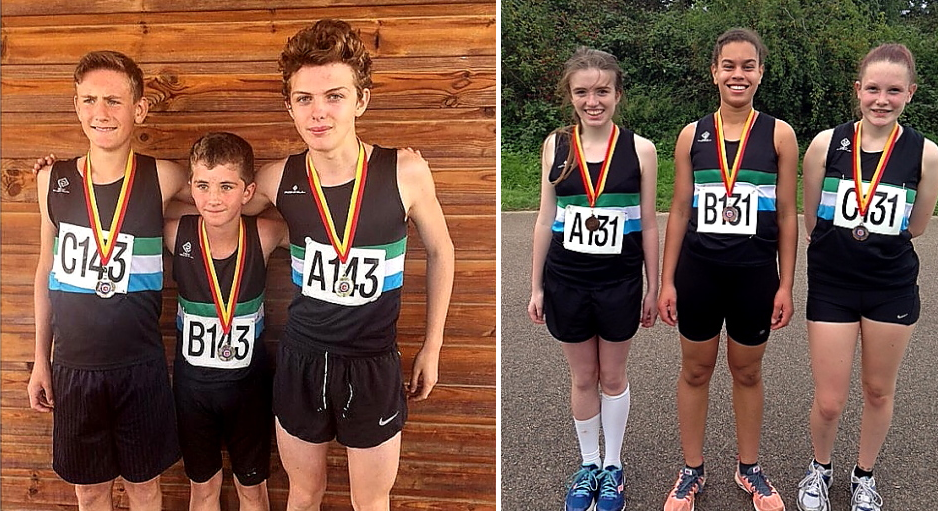 Laurance Edwards tops the winter rankings for 2014-2015. Award winners for each age-group are:

Belated congratulations to all the athletes and we will have an awards ceremony in due course!

Laurance Edwards produced the performance of the day with an exceptional 3rd-place finish for the U13 boys.

The U13 girls also performed very well, finishing in 4th as a team with Sophie Peters, Sally Tremlett andAnya Freely all showing good promise for 2015.

For the seniors, there were very good results for Emily Antcliffe and Nicky Ashe, both running well at present.

Also battling the rain and mud, Alan Wray continued with his post-bike crash comeback to finish an impressive 16th, just ahead of Jim Cooper in 20th.

Ellen Rose-Senior and Katie Watkins finished 2nd and 4th, respectively, in the Junior Ladies. Jonathan Collier continued to show his strength, finishing in 6th for the Junior men ahead of Sam Fenn, doing well in 15th.

Eilish O’Grady finished 6th in the U17 Ladies.

Abi Khamoun’s U15 boys team performed tightly with less than a minute splitting Jaouhar Karmoun in 14th, Tim Fenn, Liam Bunn and Albie Tremlett in 27th. The team finished a respectable 6th and will be looking to the year ahead positively.

Harrow Athletic Club’s junior (under-20) women’s squad made a great start to its Chiltern League campaign with a narrow victory in Watford’s Cassiobury Park on Saturday, writes Tony Bush.

Megan Wilson was Harrow’s leading runner, in seventh spot, and she was well-supported by Marella Whitfield (11th), Eilish O’Grady (13th) and Rachel Ayrton (30th), as Harrow won by two points from Wycombe and Chiltern.

Emily Antcliffe was Harrow’s top runner in the senior women’s event, placing 18th, while Lilian Cottrellwas 22nd in the under-15 event and Sophie Peters finished an excellent 12th in the under-13 race. Eve O’Goan was a good 13th in the under-11 event.

The senior men’s team was severely depleted by injury and unavailability and could manage only ninth team place, its worst result for many years.

Matt Carey was Harrow’s leading runner, in 26th spot (below his best), while Philip Benson ran well for 30th spot. Mark Cursons, who finished 50th overall, was third in the over-50 category.